We were quite impressed with this year’s wearable technology show at the Excel London Exhibition centre, which took place between the 15th and 16th March 2016.

We wanted to see what latest offerings were in terms of Virtual Reality, Augmented Reality and gadgets.

What is Virtual Reality?

Virtual Reality (VR), which can be referred to as immersive multimedia or computer-simulated reality replicates an environment that simulates a physical presence in places in the real world or an imagined world, allowing the user to interact with that world. Virtual realities artificially create sensory experience, which can include sight, touch, hearing, and smell.

Sounds good, so what is Augmented Reality then?

Augmented reality (AR) is a live direct or indirect view of a physical, real-world environment whose elements are augmented (or supplemented) by computer-generated sensory input such as sound, video, graphics or GPS data.

So what did you see at the Exhibition?

We had met quite few exhibitors at the event. Each were offering spectacular products or services and we were mind blown by some of them.

Here are some of my highlights:

Their main office is in Armenia but they operate in many countries such as US, Canada, Germany, Russia and are still expanding.

We were greeted by Arman (Cofounder) and Avetik (CCO) who sampled some of their products to us. In front of us was a big screen, where we could see ourselves and the rest of the people walking past. 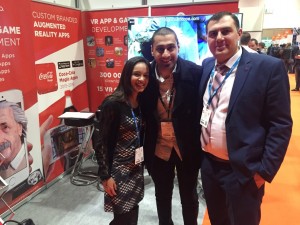 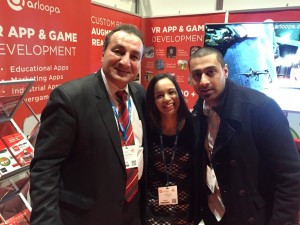 At first I just assumed it was a normal camera but all of a sudden we were surrounded by dinosaurs walking in and out the screen.

On screen it appeared that we were in actually in the same world as these dinosaurs because they were pretty much walking in front and behind us. What impressed me more was that we could actually kick these dinosaurs out the way!

This was just one of Arloopa’s AR offerings. I was told that this concept can be applied to pretty much any other object depending on the client’s requirements.

Other AR products that were shown to us were motion sensor games similar to that of the Microsoft Kinect. We were given putty, which interacted to whatever game that was projected onto the ground such as Ice Hockey. When we moved the putty with our feet (or hockey stick) it moved accordingly onto the screen.

I must admit we were blown away with the products and services that Arloopa offers and will have no hesitation to say that they will become even bigger in the market.

We came across OctagonStudio as their booth caught our attention due to the cute animal t-shirts and pictures they had on display. I just assumed they were selling ordinary t-shifts, playing cards and other learning material for kids.

However, I was wrong. OctagonStudio have focused their solution towards the education market such as schools and nurseries. Children learn quicker when they’re more engaged and having fun.

One of the lovely exhibitors was more than happy to demo one of her products. She had asked Karisma to hold up a random t-shift of a Monkey. Then she held up her ipad as though she was about to take a picture but all of a sudden this animated monkey came to life and started moving. I was amazed!

I didn’t want to miss out on the action so she asked me to sit down next to a poster of a dinosaur. Again, she held her iPad up hovering over myself and this poster. The dinosaur on her iPad came to life and you can also clearly see me in the same frame as though we’re in the same room.

I was given sample pack of cards with various animal prints try out on my own iPhone by downloading the Animal 4D app from the Apple Store.

So for the Example if you launch the Animal 4D app on the iPad and hover over the picture of the monkey, then you’ll seen an animated monkey come to life.

What else did you see at the Exhibition?

We came across various Exhibitors offering virtual reality and augmented reality solutions but there were some offering gadgets and other products being demonstrated too.

One of them was AyeGear who are based in East Kilbride, Scotland. Their aim is to manufacture innovative and high quality travelling aids and garmets to meet the demands of the modern techno savvy traveller.
I had a thorough demonstration by Zain on one of their cool looking jackets. This jacket had a pocket for almost anything you’d carry on a day to day basis such as mobile phone, tablet, wallet, ID cards and your earphones which could trail along the jacket nearly without looking messy. 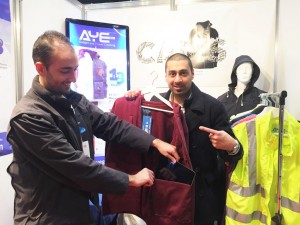 For someone who wants to travel light without the need of carrying extra luggage I can see how their products will come in use.

Overall I was impressed with what AyeGear had on offer. The fabric and workmanship on their garments was really good quality.

Overall I was impressed with the VR and AR products that I had seen from the exhibitors. Not only has this technology advanced so much in recent years but it’s becoming more popular and affordable by the consumer.

You can pretty much assemble your own VR headset and use it in conjunction with your existing smartphone such as iPhone and Android device.

If you want to know more about that then click here.

We happened to stumble upon the Ar.tifact. We were greeted with a friendly smile from Andrew and Michael who had nicely laid out their products. Both were really lovely and took their time explaining what they do and demonstrated their VR apps to us. 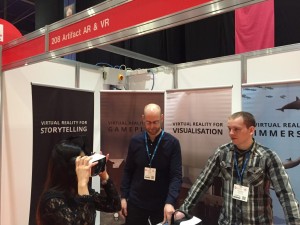 We wanted a piece of the action so had a go at one of their VR games –  BoneYard. The steps to select and play the game were pretty cool too: 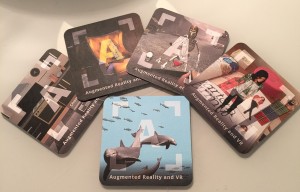 Another company that we came across was Chipolo. Have you ever misplaced your car or house keys and pretty much looked everywhere knowing they are somewhere but can’t just find them?!?

These guys offer a simple but smart solution. One of their products is a Bluetooth enabled keyring/fob. In conjunction with that they have a smartphone Chipolo app. So if you ever lose your keys, which are attached to this gadget you’ve got a fair chance of finding them by launching the Chipolo app. 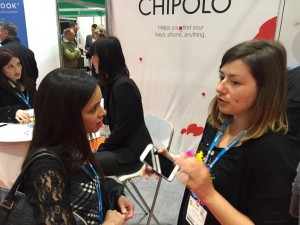 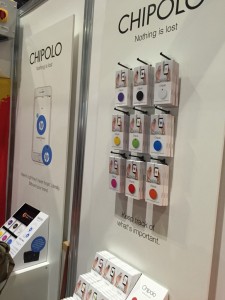 This allows you to connect your phone via bluetooth with the Chipolo keyring/fob. Once contact is made the keyring will beep making it easier to locate your missing keys. However, if you’re unable to hear the sound then the app also tells you how far you are from the device and the closer you are it will indicate that accordingly – neat hey!

The Gadget Show and Channel 4

The Wearable Technology show also caught the attention of The Gadget Show and Channel 4 as they were also keen to see what is the latest crazy in the world of VR and AR.

My overall conclusion is that there is no doubt that Virtual Reality, Augmented Reality and relying on gadgets is becoming more and more popular to the point we can’t imagine life without them.

So what are your predictions then Jass?!?

At the time of writing this blog I believe that there is a lot more of this technology coming our way and it hit us fast. We will see this in our everyday lives such as at home and whilst food shopping. For example our TV’s will project holographic AR images to come out of them to mix the real world along with the world you viewing on screen.

I hope you’re enjoyed reading my blog on the Wearable Technology show. If so then please do share and offer any comments.